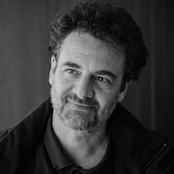 Gianluca Barbadori is a director and theater teacher. He has directed more than 60 pieces in English, Spanish, Portuguese and Chinese, and performed in Italy, Argentina, Brazil, Colombia, Hungary, Iran, Uruguay and the United States. He is currently running the theater "Ponte Tra Culture" in Ancona and "El Hormiguero Teatro" in Bogota. He has been engaged in theatrical pedagogy since 1994, with professional actors, as well as on theater projects applied in working with specific social groups.