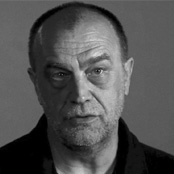 Graduated from the department of Philosophy at the Philosophical Faculty in Belgrade and received a Phd degree at the Faculty of Media and Communications, Singidunum University in Belgrade. He was awarded the Nadežda Petrović Memorial Award, as well as the award of the October Salon in Belgrade. He was the editor for theory at Moment magazine. Until 1997, he was the director and the editor-at-large of New Moment, magazine for visual culture. In 1998, he published the book Cutting Through Chaos and the monograph Art Sessions: Era Milivojević (both for Geopoetika). He was the Artistic Director and curator of BELEF festivals in 2003 and 2004, as well as the Artistic Director of the Biennial of Young Artists in Vršac in 2002. He lectured as a guest professor at the Faculty of Fine Arts in Belgrade and Fine Art Academy in Cetinje (Montenegro). He is the editor of the Artedition of the Geopoetika publishing house.